This week I had a blast sculpting a tiny 1/100 scale knight. I was designing my own medieval coat of arms at the time of sculpting, so naturally I got very fired up about my little side project. It was my first medieval sculpt and also done in allmost one piece, which was new to me. I had so much fun from the start that I decided to document my progress for you fellas. I hope my workflow comes in handy if you fellas want to try your hands at sculpting.

First things first tough.
I work mainly with a product called “Super Sculpey” – and it is very awesome. It has a definate edge against all other mediums I have ever tried. Green Stuff / Epoxy putty is nice for repairs and small alteration work, but Super Sculpey is so much easyer to handle and it does not harden or change behaviour untill you actually bake it. After baking it can be sanded or cut, and it is a bit more fragile than say resin – but for sculpted masters it is worth its weight in gold. It is also sturdy enough to be used on bases for example.
When working in 15mm scale I like to mix grey (hard) sculpey and pink (soft) sculpey together. I find that grey is too hard and pink is too soft when doing really tiny and tricky sculpting, but a rough 50/50 mix is just right. I also use mainly two or three sculpting tools and a few good exacto knives. My weapons of choice are your everyday household pin, a pointy steel tool (larger than the pin) and a spatula of sorts (some random little blade with the blade inserted backwards, yelding a nice 3mm wide spatula to work with)  – and ofcourse fingers. Fingers are awesome, but a bit crude.

Ok – Still with me? On with the sculpting then :

I first made a rough shape of a horse using exacto blades and my fingers. Then I started to fashion the faceplate of the horse, the lower jaw and muzzle and then moved on to all the fun little bits like eyes and ears and whatnot. I leave a generous lump of sculpey on to the belly side for me to hold on to while sculpting. When I am finished I will cut the sculpted miniature from its lumpy hilt, and that edge will be the “open” edge when the silicon mould is made from the master model.

Next up I sticked some more sculpey on the back of the horse and sculpted the knight. I wanted alot of cloth because I dont use any pressure pots etc. when pouring silicon/resin, so in this scale I need to figure out which kind of pieces I can actually make and sculpt accordingly. When I was happy with the knight I started to look at the overall posture. Sculpey is great as it keeps its shape pretty well if you touch it softly, but you can warp and bend it alot if you apply enough force and still not loose the overall shape you have previously done – or not too badly anyway!

Last thing was the ground features and the horses legs. I had to leave alot of sculpey underneath the horse for casting reasons, so I designed the semi-rearing horse ontop of some rocks to fade out the block between the model and the ground. I left all the small or thin parts off at this point, thinking I would apply stuff like weapons and reins to the cast copies rather than try to cast them with the master (it wouldnt work with my setup, trust me) 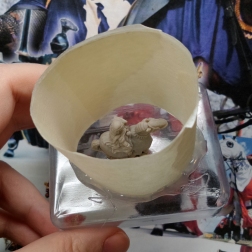 When I was happy enough with the master, I cut it off its sculpey hilt, baked it in the oven (give or take 22mins at maybe 125 celsius) and made a moulding box using masking tape (two strips with sticky sides together) and hot glue (to fasten the masking tape on to the floor of the box and also as a seal so the silicon wont escape) – I poured the silicon and while waiting for the silicon to set I watched a good movie for inspiration. 10 points if you know the movie. 20 if you remember the name of the baddie, as he is awesome. 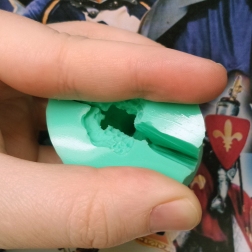 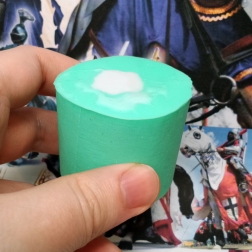 Behold! It is the mould. And it had to be brutalized very severely in order for it to actually work. The horse head was tricky, so I cut the mould open all the way to the chin of the horse. After I tought the mould would work, I poured in some resin and left it to set.

Like allways, using only gravity (and toothpicks) to get the resin into the mould, I was left with alot of airbubbles. That is something I knew would happen tough, and not a real problem when doing just a few copies. This time I just wanted to make a mould, even if I only needed just one miniature to begin with. I filled the holes and made some other small detail work like the crest for the helmet, the reins and ofcourse the lance. Every added detail is thin plasticard, except the lance which is actually a metallic pin (the same kind I used for sculpting the darn thing!) – the base is a 20 cent euro coin. After all the small details where in place, I primed the miniature with black and started painting. Lastly, you can see the finished result.