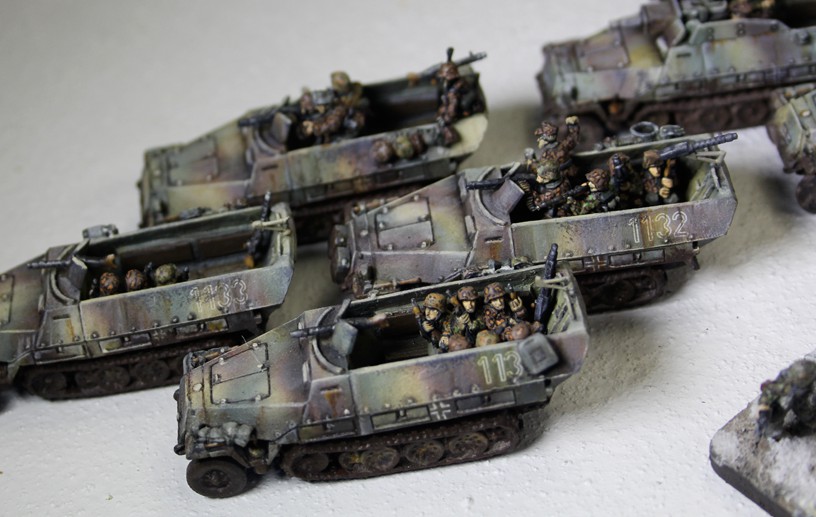 Having received a mediocre painting score in the Flames of War 2011 Euro GT I decided to up my game a little. So far my painting philosophy had been more about painting gaming tokens or at best individually nice looking units, but I hadn’t considered the army’s visual cohesion at all. For Euro GT 2012 I decided to give a go at painting a visually coherent and well themed army.

The tournament was held September 22-23. I had the weird little thing called life throwing all sorts of obstacles at my way as the Tournament drew closer. The first and most major one was moving house, and that was due at the end of June. That meant -in addition to a huge load of other stuff and multiple pains in the ass- I needed to pack up my painting station and build it anew. The whole moving business delayed my army project by a couple of months, so it was going to be a busy late summer.

Another huge speedbump was my indecision about which army to play and to paint up! At first I had my mind set on an SS infantry company, and I even had it all built and half painted. However, somehow I managed to completely ruin the base colour of their camo suits and got so demoralized by my failure that I decided to trash the project. And all the time the clock was ticking.

It was around the end of July when I locked my sights on the Kampfgruppe Peiper list. I had a few books about that campaign on my shelf, so reference material was readily at hand. I researched the subject well, studying units, their numberings and compositions etc. and tried to compose my army list respecting history to the best of my abilities and yet within the limitations of the FoW rules. The setting of this army was to be the events around the villages of Stoumont and Stavelot, December 1944.

For this army I used Battlefront miniatures’ products exclusively, as you can only compete in the Grand Tournament’s Best Painted competition with their stuff. Luckily, my friendly local game store had enough of the stuff I needed to get the project well on the way while I waited for the rest of the stuff to arrive by mail. I began with a platoon of  halftrack-mounted SS-infantry, as I really love the look of a mechanized platoon. Also, they are possibly the best unit you can field on an FoW table. I decided to use Kerr&King infantry bases to mount my teams on. I modified them a little, adding some debris, rubble and generic feel of war-torn destruction. And of course snow.

At that time I hadn’t yet mastered the art of hard edge camo painting, so I decided to go with soft edge instead. The pictorial evidence of KG Peiper’s vehicles suggests that the majority of 251:s were in fact camouflaged in hard edge patterns, with some exceptions.

I was also a huge fan of edge work at this time. You can clearly see how overdone the edges are on these minis.

I wanted to include as many different subtypes of the 251 halftrack in this army as possible. The ones in the left are 251/2D, armed with the Granatwerfer 34 mortar, while the rightmost ones are 251/9D carrying a 75 mm infantry support cannon.

Kampfgruppe Peiper was all about tanks, and naturally I had to have them. Many of them. The core of my army consisted of two platoons of Panzer IV ausf. J’s, a total of 8 hulls. I decided to paint them in a variation of the ambush pattern with soft edge dots all over the vehicle. Originally I wanted to airbrush the dots, but at that time my mastery of the airbrush was not up to the task. The airbrushed dots quickly became blobs and runny spiders threatening to ruin the work. So, instead I picked up a brush and tried to make the dots as soft as possible. After painting the dots with a brush, I airbrushed the base colors on them to fade them into the surface more.

When talking about Kampfgruppe Peiper or the Ardennes offensive, one simply cannot ignore the mighty Königstiger! I knew instantly that I had to field them. I had seen pictures of KG Peiper KT’s without zimmerit, and I liked them a lot. However, at that time Battlefront didn’t manufacture such a model, so I had to grab a couple of KT’s with zimmerit and remove all trace of the stuff. I spent the better part of two days sanding and filling the model over and over again, but in the end I was really happy with the result. If you ever undertake such a task, I can recommend airbrushing the model very thinly with black primer every now and then during the sanding/filling cycle, as it greatly improves the chances of spotting any uneven or rough spots.  After removing the zimmerit I crafted some details on he turret, as the original ones were wiped out with the zimmerit. Again, the Königstigers were painted in soft edge camo.

The paint job of this army has its pros and cons. The biggest pro is the fact that the army is very coherent looking. The vehicles are all painted with the same pallette, even though individual hulls have slight variations. Even the infantry seems to sit very well with the vehicles. I strongly believe that army cohesion won me the Best Painted title with this army.

This army was the first one I really used artist’s oils on. Looking back to the army now, I overdid it grossly, and that really shows. I virtually gave an oil bath to all the hulls. True, it blends the colors really nice together, but in my opinion overdoing it has caused the models to lose much of their contrast, depth  and even vibrance. I also feel that the oil has changed colour over the period of three years. The models have lost a lot of their original luster and they have become quite dull in appearance. This could be due to the extremely long drying times of oil colours. The big boys have said, that it could take months or ever years for oil colours to dry completely.

All in all, the army still looks rather good to my eye and I am very proud of it. Painting it up definately ignited a spark in me to focus on army-sized projects. Many lessons were learned, mainly that such a project really can be done. And it’s not even that hard. All it takes is an idea, some determination, lots of inspiration and a couple of buddies to cheer you on as you go. 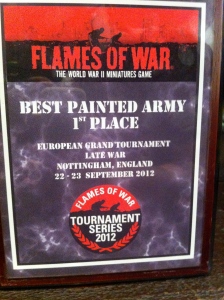